Is The Worst better than The Best?

I am a long-time reader of Kevin Kelly’s Cool Tools. Contributions from folks like Bruce Sterling and Adam Savage have helped me come to appreciate how awesome it is when someone cares enough about their tools to really nerd out on a domain, find the best solution and then share it with the world. You can feel the pride these people emit after discovering something that is demonstrably, repeatably better than other options. These folks are not afraid of expensive things, even though their picks are often the cheapest available.

I read Dustin Curtis’ post “The Best”, which was about his decision to put effort into buying the things he uses. For better or worse, he used Yanagi flatware as an illustrating example. Dustin’s got a lot of geek cred and a post like this exposes him to potential criticism, which arrived in the form of a rebuttal entitled “The Worst”. It was written by some guy I’ve never heard of and whose name I can’t take seriously, so I’ll affectionally refer to him as White Dreads from here on.

Dreads’ post manages to be more pompous and elitist than Curtis’ original post was never trying to be. It hides the author’s implicit assertion that his value system trumps Dustin’s by referencing consumerism, environmentalism and embracing simplicity. This is somewhat ironic given that Dustin Curtis is a talented interface designer who is known for kicking back against corporatism and advocating for uncluttered design.

It’s amusing to read comments from people competing on how little their knives and forks cost — pennies per item! — and how little they would care if friends came over and broke everything in the cupboards. Personally, I chose to ensure that my own flatware is statistically average and instead of participating in capitalist consumption I prostituted my body to acquire everything through barter. If you’re not part of the solution, you’re part of the problem, right?

White Dreads is politically enlightened. He projects his righteous, ascetic radical lifestyle as the solution to the problem of bourgie celebrity hackers. They flaunt their success by surrounding themselves with objects that burden their soul and torture the planet. Curtis orders bottle service while Dreads is out dumpster diving for dinner.

Yanagi flatware is functional art, dipshits. It is sold by MoMA where it resides in their permanent collection. Sori Yanagi was a legitimately famous Japanese product designer, known best for his Butterfly Stool (1954): 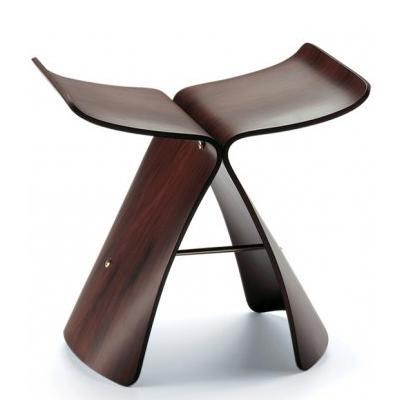 So let me break this down for you: all Dustin Curtis did was buy some art — in this case, flatware that is cool to him regardless of whether anyone else agrees. He researched thoroughly and took the time to appreciate what he was getting before parting with his money. His sin: sharing something that he was excited about with people who can’t see past their own likes and wants. Never mind that the journey of deciding on the outcome is a process of artistic expression in itself, Dustin is a rich, planet-hating sell-out.

Have you ever bought art? Did you take the time to learn about the creator of the art, why they made it and how it would integrate with your life? Congratulations, that’s a legitimate reason to buy art.

Have you ever bought art because you think it looks nice and compliments your space? Congratulations, that’s a legitimate reason to buy art.

Have you ever bought art because you want to support an artist or make a speculative investment? Congratulations, even this is a legitimate reason to buy art.

You don’t need to justify why you like something, or whether it qualifies as art to you or White Dreads. Frankly, if you collect anything or even just like to have the latest smart phone, you don’t have a leg to stand on in this debate.

As it happens, designing flatware is just as legitimate a creative pursuit as writing code. We argue over which languages and frameworks are “better” even though most people would insist that it just doesn’t matter. Of course, if you told flatware designers that a bunch of programmers were trashing the pinacle of their trade, they would be justified in laughing at you, writing smug comments on your MacBook Air. Where the hell do you think Jony Ive draws his inspiration from?

The first night I met my girlfriend, I asked her what she was passionate about. Her reply was that she was really excited to design her own flatware. I thought that was really fucking cool. With encouragement, she soon accepted a contract as a designer at Ikea, and while she’s not made her flatware quite yet, I challenge you to find a creative domain where people take attention to detail as seriously. We web types talk the talk but they actually craft iteration after iteration with their bare hands and simple, proven tools.

I wish more people would put in the time to research the things that they buy. Where stuff comes from and where stuff goes. It’s okay to get nice things once in a while. What Dustin Curtis buys is his business, and ultimately is less interesting than why he buys it. I forgive White Dreads in advance if he ever finds himself wanting something nice.

Check out this short documentary: The Knife Maker