Last year, I bought my ex a purse that could get her killed. 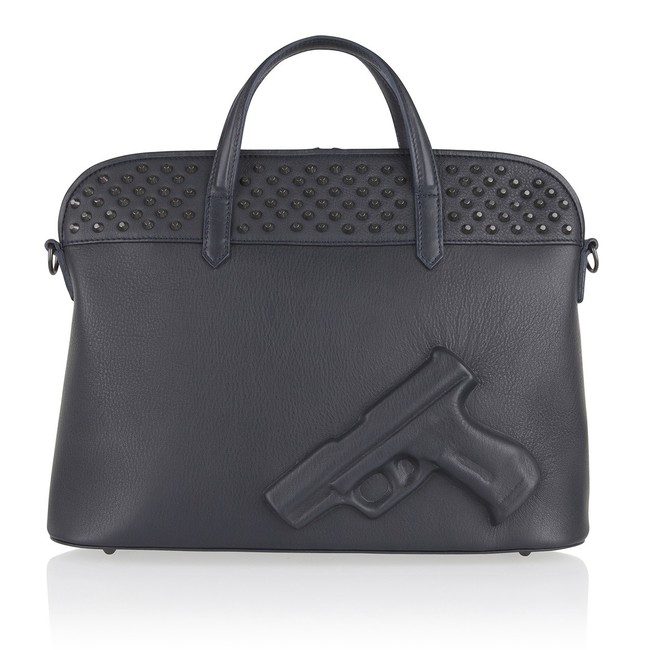 She’d seen Vlieger & Vandam’s “Guardian Angel” bag at MoMA, and finding the one she wanted to surprise her with became a quest. She was a design expert living in Netherlands, and I don’t know anything about handbags but I was happy to be with someone quirky enough to appreciate such a polarizing accessory.

As soon as we had it in hand, I started to get nervous. The bag was in the US and we live in Canada. I was afraid that shipping it would result in customs cutting into it like morons, so we planned to bring it home from a wedding. That’s when we saw the warning tag attached to the bag with a little chain:

Jesus Christ: we’re trapped in the most paranoid country on earth with what is essentially a fake weapon to a really dumb person.

Sure, we can check it in a suitcase, but what if it comes up on the x-ray and we’re not there to explain? I emailed the designers of the bag in a panic:

X-Ray will not be a problem, since there is no iron or other material than foam in the gun form. Customs will ask for what use the bag is and what material it is made of. We then indicate it is a leather bag for personal use, tariff code 42022100.

Before heading to the airport, we went to the bank. We were taking money out of the ATM when I suddenly realized that it’d literally taken us less than a day to walk into a bank with a very realistic looking not-gun, proudly displayed for all to see.

There was a security guard ten feet away, and this felt like the longest cash withdraw in history. The guard never looked at us, but my heart was pounding in my ears. I started sweating profusely.

We made it back to Toronto just fine, and to the best of my knowledge all of my concern hasn’t translated to real problems. However, I did get an email:

Hey so I got a weird look from a car passing by and realized my bag was facing gun up on my passages seat, it totally looked like I had a black hand gun sitting beside me. Haha wow I really have to be carful

Haha, indeed: no more handbags for you!

I’ve thought a lot about the bag since. Originally I saw it as a clever piece of fashion that has been deemed “art” by the experts, which to this INTP gives it a lot more cred than something that’s expensive just because it’s got the right brand attached.

An expensive bag that actually makes the owner less comfortable than if they didn’t have any bag at all is a potent satirical statement on the compromises we make between style and comfort.

And let’s throw this one out there: the owner of this bag is an attractive, well-dressed straight white woman. You can’t evaluate your relative risk in carrying such a thing without considering how a police officer might choose to evaluate you.

I love to debate this blog post, “Good art makes you uncomfortable” with my friends. Go ahead and read it, then come back. I’ll wait.

The key insight is that you cannot simply walk past art that makes you uncomfortable; it demands to be observed and contemplated.

This is not about the talent of the artist or the beauty of the work; nor is it about art that is over-the-top gross, pointlessly gory or just lacking in good taste. It’s not a statement on what constitutes art.

Art that makes you comfortable gradually becomes invisible. It doesn’t challenge you. It is a decoration.

Art can be beautiful and uncomfortable at the same time.

For me, this is why high-concept, abstract or seemingly minimalist art completely makes sense to me: it sends away many onlookers in a state of confusion, angry that good money was paid for a red dot. 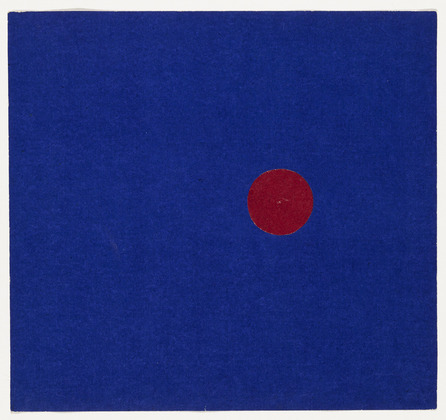 Angry that something they or anyone else could do, except that red dot is in the MoMA.

Angry that it’s the red dot that they are still thinking about, weeks later. 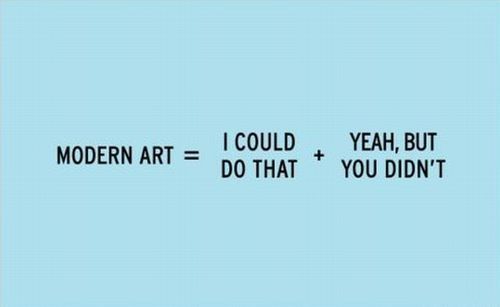 Earlier this year I weighed in on a debate about flatware.

I haven’t changed my position on the debate; Dustin should be able to spend his money on whatever makes him happy, so long as it doesn’t hurt anyone. And if he blogs about buying Samurai spoons, he’s probably going to take heat from people like White Dreads.

However, in light of our adventures with the fucking gun bag, I can’t help but see the Yanagi flatware as a statement on class politics. It’s the relationship between the poor artist that quietly mocks their rich patron, who lust after shiny new objects which promise to give their lives deeper meaning.

Do you have what it takes to carry a handbag that might get you shot?

Subversive politics and excellent mouth-feel, together at last.

Forget “eyeballs”. With so many eager Pebble clones on the horizon, could wrist real-estate bottleneck the Internet of Things? At 35 years old, I just barely sneak in at the tail end of Generation X — and most of my friends that are... Continue →